Warrada the Shadow is a Shadow Magi who was originally from Naroom. She is the twin sister of Hrada and one of the Dark Twins.

She and her twin brother, Hrada, managed to conquer Naroom for a time and act as co-rulers of the region. They later were forced out by the Naran Magi.

Warrada was a Shadow Magi who battled with Dream Creatures from the Shadowhold including Kletch, Sarbil, and Spindle. She also was able to use the Flood spell, to cause high collateral damaging.

Warrada watched Tony Jones from the shadows before confronting him in the Shadow Geyser in Orothe. She gave him the choice to receive Orothe's Core Stone in exchange for leaving the Moonlands and giving up his fight against Agram.

If Tony rejected the offer, she would battle him as usual. If not, she would later battle against him in Arderial's Shadow Geyser.

Warrada served as one of Agram's Shadow Magi. Magi Undercover 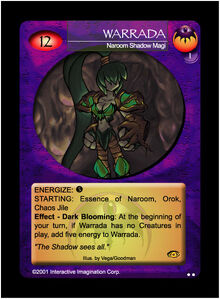 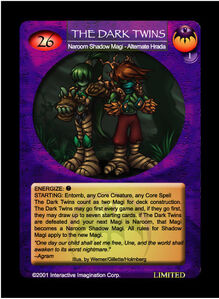