Ugger was released as a part of the Awakenings set of Magi-Nation Duel.

An Ugger's ring was found within Naroom's Shadow Geyser by Tony Jones while being attacked by a Dryte Fiend. Upon Tony's picking up the ring, Ugger was summoned and volunteered to join him after seeing Tony defeat the Dryte. source needed Tony's Ugger was extremely talkative to the point of being considered rather annoying by the other characters. Also, despite being a Core Creature, it exhibits few if any malicious tendencies. source needed

Ugger is the primary Dream Creature of Edyn, with whom he has a fairly close relationship. Final Dreamer

Ugger was later capable of combining with Freep and Furok to form Rokreeper due to the power of the Final Dreamers. Day of Destiny

Ugger mainly fights using a pair of hidden roots under its body or with its horn. His Root Reach ability can also be used for transportation by swinging from tree branches. 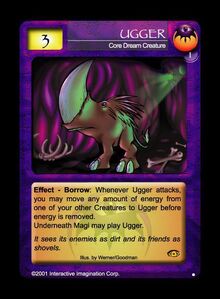