Tony Jones (redesigned as Dan Monma in the GBA game) is a boy who lives on Earth at the end of the 20th century. He is one of few humans to have traveled between Earth and the Moonlands and is believed by the Eliwan to be the prophesied savior of the Moonlands who would fight an army of Shadow Magi under the control of Agram.

Tony Jones was released as a Promotional card for Magi-Nation Duel.

Upon moving to a small neighborhood in Tavel Gorge, Tony was dared by the local children to retrieve a rare crystal from a cave. He found the crystal, but the cave collapsed and sent Tony falling into a chasm. Tony woke up in a pool of water in a world known as the Magi-Nation.

After witnessing a Dream Creature, Furok, appear from the crystal, Tony met Eidon, who took Tony to the nearby town of Vash Naroom, believing Tony to be the prophesied reincarnation of the Great Magus Kyros. Against Orwin's wishes, Tony was snuck into Naroom's training grounds where he learned how to control Dream Creatures. However, the news of an earthquake due to a Shadow Geyser interrupted the training.

Tony was then sent to Gia, a matriarchal figure of Naroom, who affirmed Eidon's suspicions about Tony and that only Tony could use the Core Glyph to defeat Agram. Tony was then sent to enter and destroy the Shadow Geyser by removing a Core Stone from its foundation. He succeeded and afterward followed a hooded figure into a cave, where Tony found a pair of Crystal Blades. Tony returned to Gia with the stone, finding that the stone fit perfectly into the Core Glyph.

After similar stones were located telepathically, Gia sent Tony to the Underneath, where there was another earthquake due to a Shadow Geyser. Tony entered the Shadow Geyser and took the Core Stone. However, upon returning, Tony found the Underneath ransacked by Shadow Magi with the hooded figure, Morag. Tony was defeated but was saved by Wence.

With the help of a mysterious figure, Tony escaped and found himself in the underwater region of Orothe and able to breathe thanks to the Orothean Belt. Finding a fourth Shadow Geyser, Tony found Warrada guarding it. Tony was given the choice to take the Core Stone without a fight if he would not close any more Shadow Geysers or combat the Shadow Magi.

Regardless, Tony then traveled to the entrance to the Core but was unable to enter. Here, he encountered his rescuer, a winged being from the cloud city of Arderial. Upon arriving in Arderial, Tony found the city under siege by Shadow Magi. Meeting Agram, the leader of the Shadow Magi, Tony learned that the fifth Core Stone from Arderial was required for the Core Glyph to work.

After obtaining the fifth Core Stone, Tony met Agram in the Core and was given the choice to return home without a fight or to fight Agram to save the Eliwan from extermination. After fighting Agram, the world of Magi-Nation was saved, and Tony returned to Earth with the respect of the other children.

As a Universal Magi, Tony could control Dream Creatures from any Moonland, even the Core. As the vessel of Kyros, Tony uniquely was capable of wielding the Core Glyph without being harmed and was immune to the adverse effects inside the Shadow Geysers. Tony's abilities as a Magi developed exponentially, and he was even capable of summoning Furok from raw, unforged Animite upon entering the Moonlands. As a native of Earth, Tony was only able to communicate with the Eliwan through a magical translation bracelet and was even able to understand the language of the Ancients. Without the aid of the Orothean Belt, Tony is unable to swim.

Dan Monma was a resident of Yokohara Town who, upon moving there, was dared to enter a cave. Doing so led to Dan entering the Moonlands. Believed to be the prophesied savior of the Moonlands, Dan was sent by Gia with the Core Glyph to seal Agram's Shadow Geysers by defeating their guardians and retrieving the Core Stones. After doing so, Dan fought and defeated Agram to save the Eliwan race. With the Moonlands safe again, Dan returned home to Earth. Magi-Nation (GBA)

Tony Jones featured as the protagonist and had to solve various puzzles. Keeper's Quest

Tony Jones was a fifteen-year-old boy from who lived on Earth with his grandfather, Spencer Jones, who was in Tony's care. While running in the middle of a cross-country race, he was mysteriously transported to the Moonlands by Orwin and Evu using a special rock harvested from the Core, which they hoped would summon the Final Dreamer to the Moonlands to help save it from the Shadow Magi, Agram. When Tony arrived, he helped two Magi, Edyn and Strag, defeat two Shadow Magi, and he quickly befriends the allies. Final Dreamer

As one of the Final Dreamers, along with Edyn and Strag, Tony is able to magine Rokreeper. 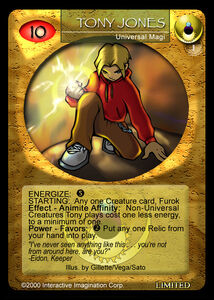