Shattering Wind is a spell from Nar which allows the player's Dream Creatures to deal extra damage during one turn.

Shattering Wind was released as a part of the Voice of the Storms expansion of Magi-Nation Duel. 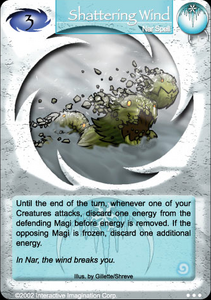 Voice of the Storms
Add a photo to this gallery

Retrieved from "https://magination.fandom.com/wiki/Shattering_Wind?oldid=23841"
Community content is available under CC-BY-SA unless otherwise noted.