Shadow Geysers are artificial Core Gates which act as traversable connections between the Core and the surface Moonlands. They were used to weaken the barrier on Agram's prison in the Core by leaking void energy and to send Core and Shadow Magi to the surface.

Shadow Geysers were used by Agram in an attempt to free himself from the Core. The Legend of Tony Jones Despite not being freed, the Shadow Geysers nonetheless signaled for the return of the Invaders the Moonlands. Invader

The Shadow Geyser in Naroom was the first to appear, forming not long after Tony Jones entered the Moonlands. When Orwin attempted to enter this geyser, he was fatally poisoned to the extend that only a Cloud Frong could save him. Tony, being given the Core Glyph by Gia, entered the Shadow Geyser and defeated its guardian, Togoth.

The second Shadow Geyser formed above Gruk's Mushroom farm in the Underneath. When the local Magi were unable to close it, Tony offered to enter it himself. The Underneath Shadow Geyser was more complex, containing two floors connected by pipes and being filled with soft dirt which could be tunneled through with Crystal Gloves. The Core Stone was protected by gates operated by four switches throughout the geyser. Tony then battled the geyser's guardian, Ogar.

The Underneath geyser is where the spellbooks for Thunderquake and Cave In can be found.

Cald's Shadow Geyser was activated by Morag upon kidnapping Tony for a second time. Upon being rescued by the Calders, who were attracted by the resultant earthquake, Tony offered to close the newly formed geyser. This geyser contained a system of floodgates controlling the flow of lava bodies. Tony deactivated a lava moat protecting the Core Stone and battled the geyser's guardian, Korremar.

The Cald geyser is where the spellbook for Flame Geyser can be found.

Another Shadow Geyser formed on a reef north of Oscent Mar. This geyser is protected by an electric field passable by using a counter-magic spell, Dispel X. Once inside, currents pulled any intruders away from the entrance, though Tony could escape with an Eldritch Awl. A lower cavern, accessed by stairs or whirlpools, led to the guardian, Warrada. Though Warrada offered to give up the Core Stone without a fight if Tony promised to stop closing the Shadow Geysers, doing so would prompt her to attack Tony in the Arderial Shadow Geyser.

The Orothe shadow geyser is where the spellbook for Tidal Wave can be found.

A giant Shadow Geyser, built from a unique, very large Core Stone, formed at the northernmost part of Arderial. Several areas of the geyser were open and required flying between areas. Doors within the geyser required a Star Key to open. Various regions of the Arderial Shadow Geyser resemble parts of previous geysers. After defeating the geyser's guardian, Morag, Tony retrieved the Core Stone, though Morag was able to maintain the geyser with his own magic.

Shadow Geysers were used by Agram to weaken the barrier on his prison in the Core and to send his Shadow Magi to wreak havoc on the Moonlands. Final Dreamer These geysers led directly into the Core and were formed by planting seeds. The Eyes of Agram 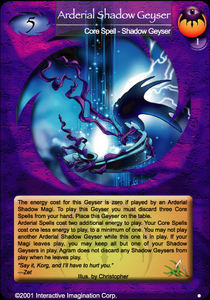 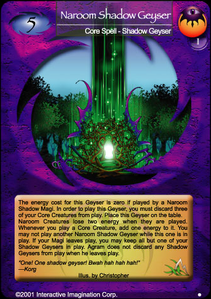