Orwin is the Elder of Naroom. He is the second oldest living Naroomese Magi, junior only to the historian of Vash Naroom, Evu. Orwin is a mentor figure but can have a short temper and intimidating presence.

Orwin was part of the First Edition and Unlimited card sets of Magi-Nation Duel.

Orwin was the leader of Vash Naroom and had a model of the planets on the second floor of his home. His earlier adventures were recorded in The Journeys of Orwin which was housed in Oscent Mar. He met Tony Jones shortly after the latter arrived in the Moonlands, forbidding him from leaving the town. As the first surface Magi to come across a Shadow Geyser in Naroom, Orwin became fatally ill after being exposed to its seal. Due to these events, Orwin relented and permitted Tony to go after the remaining Core stones.

Orwin's fate is left up to Tony, who can use a Cloud Frond to heal Orwin. If Orwin is healed, he attends Vash Naroom's celebration of Tony's defeating Agram. If, however, Orwin is not healed, his funeral occurs after Agram's defeat.

As the Elder of Vash Naroom, Orwin frequently assisted Tony Jones, Edyn, and Strag in tracking down the Dreamstones. Though a powerful Magi, Orwin rarely left Vash Naroom.

Orwin, however, was corrupted into a Shadow Magi when Korg and Zed used an Allegiance Relic and Willingness Relic stolen from Strag. Fiery Betrayal He later was later was returned to normal by the Final Dreamers with the help of the council of leaders. The Secret Chamber 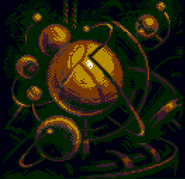 Orwin as a Shadow Magi
Community content is available under CC-BY-SA unless otherwise noted.
Advertisement