Hunter Furok is a Dream Creature native to Nar. This species of Furok possesses two-toned fur for camouflage, and the branches on its head are twisted into four horns. Hunter Furok often is accompanied by a variety of Fird from Nar.

Hunter Furok was released as a part of the Voice of the Storms expansion of Magi-Nation Duel. Due to this card's Retrieve effect, Hunter Furok can function as an anti-Relic measure. 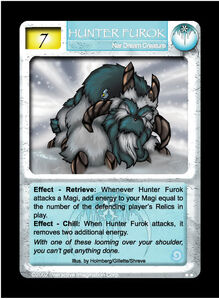 Voice of the Storms
Add a photo to this gallery
Retrieved from "https://magination.fandom.com/wiki/Hunter_Furok?oldid=23863"
Community content is available under CC-BY-SA unless otherwise noted.