Furok Protector is a Dream Creature native to Nar. This variety of Furok has icy-blue fur with brown accents and bears antlers of ice on its head.

Furok Protector was released as a part of the Voice of the Storms expansion of Magi-Nation Duel. This card is fully resistant to powers and spells from the Core. Its Thick Coat ability can add extra energy by setting Furok Protector's energy the same as an enemy Magi's energize. 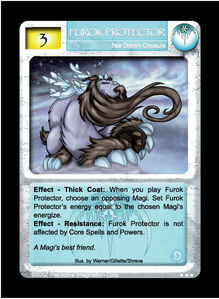 Voice of the Storms