Furok Guardian is a Dream Creature native to Naroom and is the most powerful type of Furok. Its bear-like features as a Furok are accented by a prominent mane and twisted antlers like tree branches.

Furok Guardian was released as a part of the Awakenings expansion of Magi-Nation Duel. This card can return a discarded Dream Creature with its starting energy at the cost of five of Furok Guardian's energy. This ability is especially useful for returning powerful Creatures to play and for keeping Creature abilities activated. 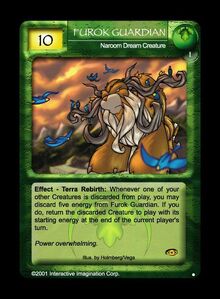