Furok is a Dream Creature native to Naroom. It resembles a bear with branch-like antlers on its head. Furok tends to have an affinity for Firds. Despite being rather dangerous, Furoks are quite loyal to their Magi. Although Furoks are typically brown, a blue variety also exists.

Furok was released as a part of the First Edition and Unlimited sets of Magi-Nation Duel.

Furok originally was the Dream Creature of Spencer Jones. Depths of Courage

Following this time with Spencer, Furok spent a decent amount of time in the wild before being summoned by Tony. source needed

Furok's Animite was passed from Spencer to his grand son, Tony Jones, in the form of a ring. Furok was magined by Tony following the instructions of Edyn and was used to battle against Korg and Zed. Final Dreamer

Furok was later capable of combining with Freep and Ugger to form Rokreeper due to the power of the Final Dreamers. 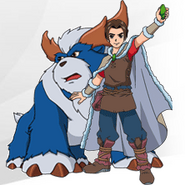 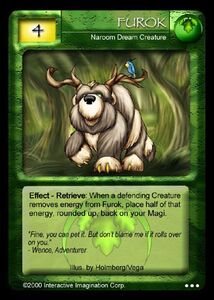