Evu the Loremaster is the historian of Vash Naroom. Evu is one of the oldest Magi in Moonlands, outstripping even the Naroom elder Orwin in seniority, as well as one of the most knowledgeable. Evu commonly has an obsession with jellybeans.

Evu was a wise Magi who provided knowledge to Orwin. Upon the appearances of a Shadow Geyser in Naroom, Evu and Tryn slipped into the geyser while the townsfolk were arguing over how to handle the crisis. After becoming separated from Tryn, Evu encountered Hrada, who lured Evu into becoming a Shadow Magi with jellybeans. The evil Evu then led Hrada and Warrada into Naroom's Great Library, allowing the Moonland to fall into the Dark Twins' control. Evu subsequently fought against his homeland, eventually becoming captured upon the liberation of Vash Naroom. source needed

Evu resided in Vash Naroom. Upon meeting Tony Jones, Evu provided Tony with his first spellbook, Leaf Cut. Evu also used his knowledge to identify spells, Relics, and other items. Evu later was given a bag of Poad's jellybeans by Tony.

Evu can be given more jellybeans during the game's "party" epilogue as one of the tasks required to unlock a small easter egg in the epilogue's final scene.

Evu was an old woman who occasionally used her knowledge aided Orwin. She and Orwin summoned Tony Jones to the Moonlands. Final Dreamer

As the second in authority of Naroom, she took Orwin's position on the Council of Leaders when Orwin had become a Shadow Magi. The Forum of the Elders 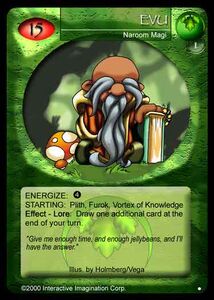 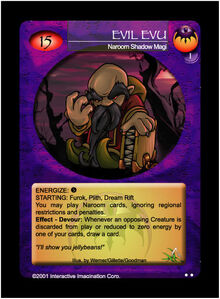